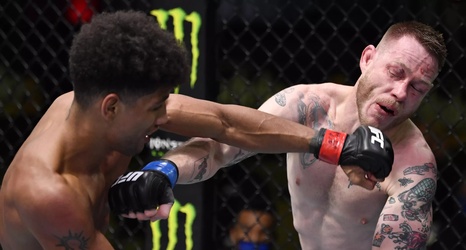 Alex Caceres picked up his fourth win in a row on Saturday night while putting on a strong showing against Kevin Croom in the opening fight on the UFC Vegas 20 main card.

After avoiding Croom’s aggression early, Caceres really started to pour on the punishment with superior striking and grappling before earning a lopsided unanimous decision. The judges scored the fight 30-26, 30-26 and 30-27 with Caceres building his best win streak in the UFC since a five-fight undefeated run between 2012 and 2014.

“We knew he was going to be a tough guy, a wild man out there,” Caceres said about Croom.