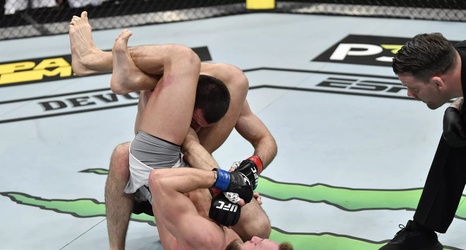 The debuting Russian fighter—who entered Saturday’s UFC Moscow event with a 15-2-1 record—fell to 0-1 inside the Octagon after being submitted by David Zawada in the opening round of their preliminary welterweight contest.

Unsurprisingly, Nurmagomedov went to his wrestling and put Zawada on the mat early. However, Zawada stayed active off off of his back and attacked with a triangle choke, eventually earning the tapout at the 2:50 mark of round one.

Nurmagomedov is the cousin of lightweight champion Khabib Nurmagomedov, the owner of a perfect 12-0 UFC record.

This was Zawada’s first win after an 0-2 start to his UFC career.