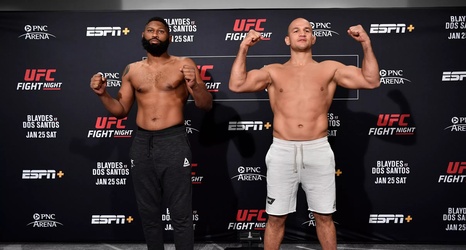 Join us today on Bloody Elbow for live results, discussion, round scoring, and play-by-play (main card) as UFC Fight Night: Blaydes vs. Dos Santos goes down in Raleigh, North Carolina.

The headliner comes in the heavyweight division, with the surging Curtis Blaydes set to take on former UFC heavyweight champion Junior dos Santos. The co-main will see two former lightweights, Rafael dos Anjos and Michael Chiesa, facing off in a 170-pound battle.

This show is a regular fight night and will air roughly according to the regular schedule. The seven-fight preliminary card starts at 5pm ET/2pm PT on ESPN+, while the six-fight main card (for which play-by-play will be provided) will kick off at 8pm ET/5pm PT on ESPN+.