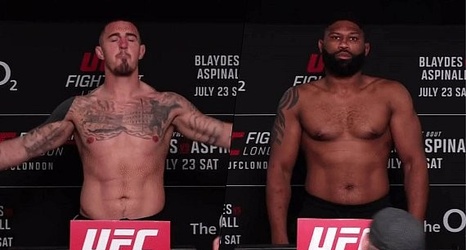 The Ultimate Fighting Championship returns to London for UFC Fight Night 208, where all 28 fighters on the card made weight.

The event is headlined by a heavyweight fight between contenders Curtis Blaydes and Tom Aspinall. Blaydes (16-3, 1 NC) has won six of his last seven bouts with the lone defeat coming to former title challenger Derrick Lewis. "Razor" weighed 260 pounds and will be the larger fighter by nine pounds. Meanwhile, Aspinall (12-2) is undefeated inside the Octagon at 5-0. The English fighter most recently submitted Alexander Volkov with a straight armbar and will look to continue his momentum.