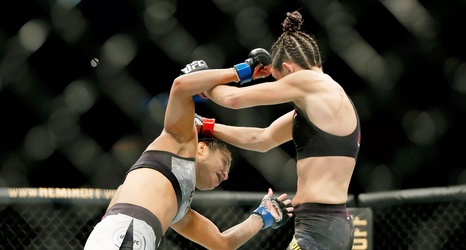 In the UFC DC co-main event, the company’s #9 ranked strawweight, Marina Rodriguez, and the #10 ranked, Cynthia Calvillo, fought to a majority draw. Rodriguez got going early, landing tons of volume and hurting Calvillo on a few occasions. Her knees were making Calvillo hesitant to close the distance for a takedown. Come round three, Calvillo rallied and scored herself an early takedown. That’s where she landed a plethora of ground strikes. Rodriguez ate a bunch of blows before finally making it back to her feet at the end of the round. It was a highly competitive bout with one major momentum swing.