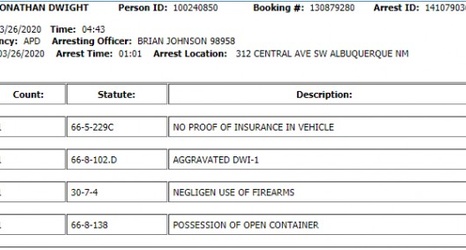 The Ultimate Fighting Championship light heavyweight champ has a slate of charges to deal with stemming from his recent arrest.

On Thursday morning, KOAT 7 News in Albuquerque, New Mexico, reported that Jon Jones has been arrested and charged with multiple offenses. Those charges include an aggravated DWI, the negligent use of a firearm, possession of an open container of alcohol in his vehicle and operating a vehicle without insurance.

According to arresting officer Brian Johnson, gunshots were heard after 1 a.m. on Thursday in Albuquerque, and officers responded to the scene.