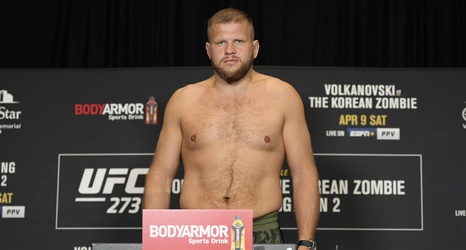 Hours after Jairzinho Rozenstruik and Marcin Tybura successfully weighed in on Friday morning, their heavyweight fight at UFC 273 has now been canceled.

The UFC announced Tybura was removed from the lineup after falling ill with an undisclosed illness. Rozenstruik vs. Tybura was scheduled for the preliminary portion of the pay-per-view event, which is now down to 12 fights as a result of the cancelation.

Rozenstruik and Tybura were originally expected to fight at UFC Vegas 49 this past February, but that was also canceled for undisclosed reasons. There is no word yet on whether the pairing will remain intact for another event.