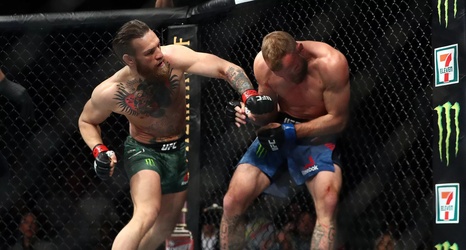 Conor McGregor returned to the win column by knocking out Donald Cerrone in just 40-seconds in the main event of UFC 246.

Both men met in the middle of the octagon and began to exchange strikes. As Cerrone slipped a left hand from McGregor, he got hit by a trailing knee from the Irishman, followed by shoulder strikes.

A big head kick from McGregor rocked Cerrone and ‘Cowboy’ began to cover up with his back against the fence. Trying his best to defend himself whilst on the canvas, McGregor continued to land ground and pound and referee Herb Dean stopped the fight in just 40-seconds.