T.J. Dillashaw would like to fight ‘legend’ José Aldo after he wins bantamweight title 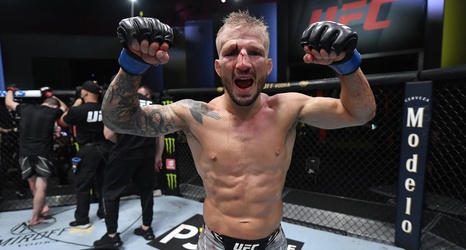 T.J. Dillashaw is open to fighting José Aldo, but only on one condition: the fight has to wait until after he wins the bantamweight championship again.

Dillashaw returned to the Octagon against Cory Sandhagen at UFC Vegas 32 in July after completing a two-year suspension from the United States Anti-Doping Agency (USADA). Defeating Sandhagen saw Dillashaw re-enter the conversation of title contention and the former two-time bantamweight champion has already made it clear that he would like to meet the winner of Aljamain Sterling vs. Petr Yan 2 next. However, following his impressive win over Pedro Munhoz at UFC 265 in August, Aldo said that a fight between him and Dillashaw would be a “great” one and hoped that it could be made soon.