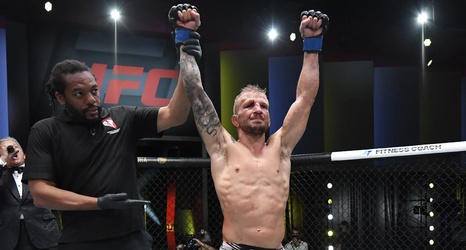 T.J. Dillashaw should be back in the Octagon by early next year.

Dillashaw recently returned to competition following the completion of a two-year suspension from the United States Anti-Doping Agency (USADA) and defeated Cory Sandhagen by way of split decision at UFC Vegas 32 in July. It was a gritty performance from Dillashaw, who fought his way through a significant injury sustained during the first round of the fight.

Days after his fight with Sandhagen, Dillashaw revealed that he would be undergoing surgery to repair multiple tears found in his left knee and needed time to recuperate before returning again.