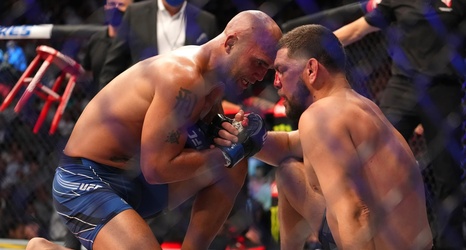 UFC 266 delivered the action and the drama last night. We saw Alexander Volkanovski survive, and thrive, to retain his featherweight title. And Velantina Shevchenko continued to prove that she is one of the best ever with a convincing defense of her flyweight title.

However, before those belts were tussled over the People’s Main Event saw fan-favourites, and Octagon legends, Robbie Lawler and Nick Diaz duke it out. This was a rematch of a bout Diaz won back in 2004. It was also the first fight Stockton’s Finest has been involved in for six years.

As was predicted, Diaz didn’t have what he needed to put away a former champ who has been far more active over the past half-decade.