Sergio Pettis on comeback KO of Kyoji Horiguchi: ‘I had to face a lot of adversity’ to get that finish 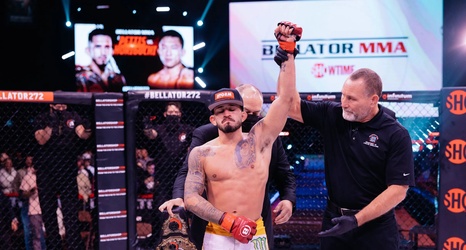 Sergio Pettis may have been on the verge of losing his bantamweight championship to Kyoji Horiguchi at Bellator 272 on Friday night, but he was determined not to let that happen.

In what is already considered a ‘Knockout of the Year’ contender, Pettis did the unthinkable and caught Horiguchi with a spinning backfist that sent him crashing to the canvas in the fourth round of their fight. The fight-ending highlight came after the champion was being dominated in all facets by the challenger, who found success over the course of three-and-a-half rounds with an awkward, yet effective style that Pettis seemed not to have an answer for.