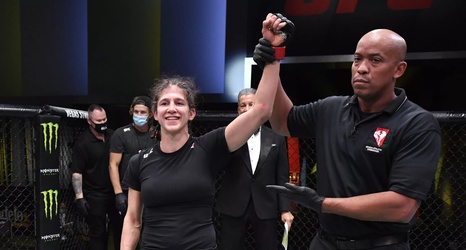 A key women’s flyweight fight is on tap for the UFC’s January 2021 slate.

MMA Fighting reports that Roxanne Modafferi and Viviane Araujo are set to fight on January 30th. MyMMANews was first to break the story. Current flyweight rankings have Modafferi at #7 and Araujo at #8.

Modafferi (25-17) bested Andrea Lee by unanimous decision at UFC Vegas 10. She has alternated wins and losses over the past eight fights, dating back to when she lost to Nicco Montano for the inaugural flyweight belt in December 2017. The women’s MMA pioneer will look for her first winning streak since earlier in 2017 when she beat Priscila de Souza and Sarah D’Alelio.