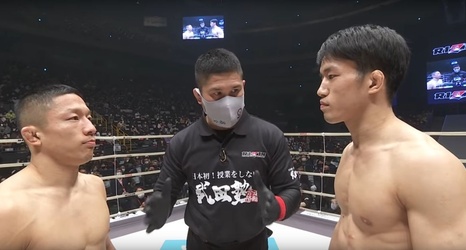 Watch Kyoji Horiguchi vs. Kai Asakura 2 full fight video to see Horiguchi make his return from a 15-month layoff to challenge Kai Asakura for the bantamweight championship at RIZIN 26 on Dec. 31 in Saitama, Japan.

The second meeting between Horiguchi and Asakura came under unique circumstances as Horiguchi was making a comeback to the ring after never having lost his RIZIN title in competition. However, has last fight before relinquishing the belt due to injury was a 67-second knockout loss to Asakura in a non-title bout at RIZIN 18. Asakura went on to capture a vacant bantamweight championship in Horiguchi’s absence.