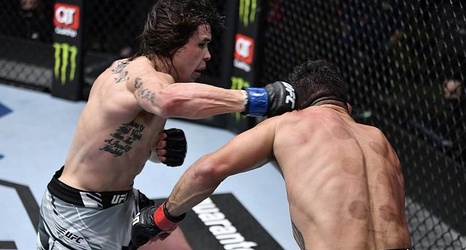 The lineup for the UFC Fight Night card on July 16 continues to grow, as a bantamweight clash between Ricky Simon and Jack Shore and a featherweight tilt pitting Billy Quarantillo against Bill Alegeo have been added to the lineup.

Iridium Sports Agency announced Simon vs. Shore, while Sherdog.com's Tudor Leonte initially reported Quarantillo vs. Algeo. UFC Fight Night is expected to be headlined by a featherweight showdown between Brian Ortega and Yair Rodriguez, with a location and venue to be announced.

Simon has established himself as a person of interest at 135 pounds with a four-bout winning streak that includes a second-round KO of longtime contender Raphael Assuncao in his last outing at UFC Fight Night 199.