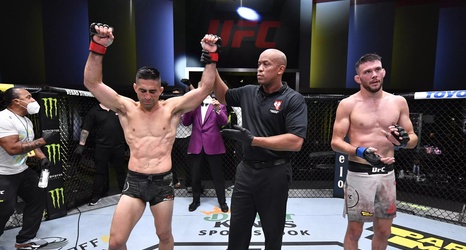 Ricardo Lamas hasn’t made up his mind yet on whether Saturday marked the end of his fighting career.

Following a unanimous decision win over Bill Algeo at UFC Vegas 8, Lamas told commentator Paul Felder during his post-fight interview that he was considering retirement.

“I’ve been kind of wrestling with the idea of hanging the gloves up,” Lamas said. “That’s something I want to talk to my family about first before making a decision.”

Backstage, the veteran featherweight elaborated on his comments and the possibility that Algeo could be his final opponent.