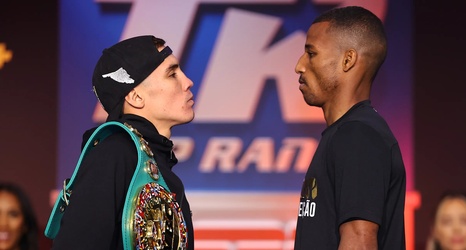 Oscar Valdez (29-0, 23 KOs) defends his WBC super-featherweight title this Friday against former amateur rival and 2016 Olympic champion Robson Conceicao (16-0, 8 KOs). Valdez took the belt from Miguel Berchelt in February with a brilliant performance capped by a spectacular KO. Conceicao immediately turned pro after winning the gold medal in 2016 but his pro career has been slow to take off. Too slow, arguably, as he’s already 32.

His competition has been pretty underwhelming for someone of his amateur pedigree and he was the beneficiary of one the most egregious robberies of 2020 when he somehow got the decision over Luis Coria despite clearly losing most rounds, getting knocked down and deducted two points for low blows.