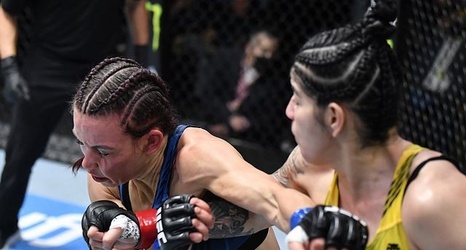 Miesha Tate’s flyweight debut will have to wait, as her proposed clash with Lauren Murphy has been removed from the UFC 276 lineup.

The promotion announced the news during the UFC on ESPN 38 broadcast on Saturday night. According to multiple reports, Murphy was forced to withdraw from the bout for undisclosed reasons. Tate and Murphy were previously slated to fight on May 14 before the matchup was postponed. The flyweight clash is expected to be rebooked at a later date.

UFC 276 takes place at the T-Mobile Arena in Las Vegas on July 2 and is headlined by a middleweight title tilt pitting Israel Adesanya against Jared Cannonier, while Alexander Volkanovski will square off against Max Holloway in a featherweight championship trilogy in th co-main event.