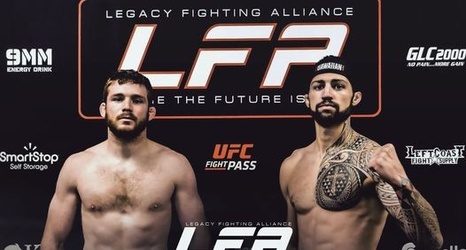 LFA returns to action tonight with LFA 107, live from the Sanford Pentagon in Sioux Falls, South Dakota. The card will be headlined by a lightweight bout between “The Jawaiian” Kamuela Kirk and “Agent Orange” Daniel Swain.

The bout will be Kirk’s fifth under the LFA banner, and will be looking to earn his second straight win after dropping two in a row, including a missed opportunity on the Dana White Contender Series to now-UFC fighter Billy Quarantillo. Swain, meanwhile, also dropped his Contender Series fight in his last outing against TJ Laramie.