Khabib open to coach against Tony Ferguson on TUF: Not many ‘big stars in UFC right now’ 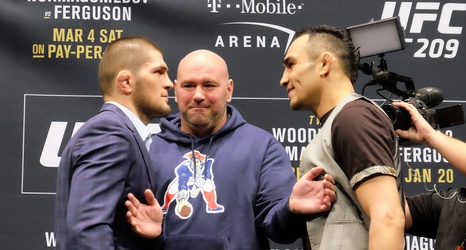 Even after five tries, the UFC failed to book the much-anticipated matchup between Khabib Nurmagomedov and Tony Ferguson. “The Eagle” ended up retiring in 2020 while “El Cucuy” is now on a decline after a dominant six-year run.

But according to Khabib, there could be a chance for him and his old rival to compete against each other. In a recent interview with ESPN’s Brett Okamoto, the former lightweight champion said he’d be open to coaching against Ferguson in a future season of The Ultimate Fighter.

“I like this idea, honestly. We can do some stuff, because right now… not too many big stars in UFC right now,” Khabib said.