Jose Aldo feels ‘no pressure’ before UFC Vegas 17, still has a ‘lot left to do’ in the sport 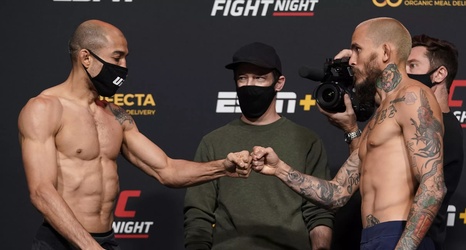 Former UFC featherweight kingpin Jose Aldo might almost be two decades deep into his MMA career, but the Brazilian still feels he has more to achieve in the sport.

Aldo (28-7) faces rising bantamweight contender Marlon Vera this Saturday night in the co-main event of UFC Vegas 17. The 34-year-old will hope to pick up his first win at 135-pounds after losing to Marlon Moraes and Petr Yan in his first two bantamweight appearances. Aldo is without a win in almost two years, last beating Renato Moicano in February 2019.

Talking to reporters including MMA Fighting before his fight with Vera, Aldo said it means a lot to be seen as one of the best fighters to grace the sport.