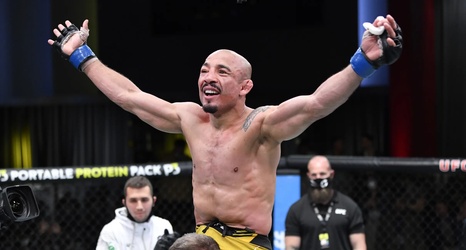 Former UFC featherweight champion Jose Aldo will have his hands full at this Saturday’s UFC 278, but this has not stopped the Brazilian from analyzing the next title fight in his current division.

Paired up against Merab Dvalishivili in what could be a title eliminator at bantamweight, Aldo is rather interested in the winner of UFC 280’s bout between Aljamain Sterling and T.J. Dillashaw.

In an interview with YouTube Channel Encarada, Aldo analyzed the pairing and pointed Sterling as a heavy favorite over Dillashaw. In Jose’s opinion, T.J.’s two-year layoff due to doping suspension and his most recent performance just raise too many questions for the Brazilian to have faith in the former champion.