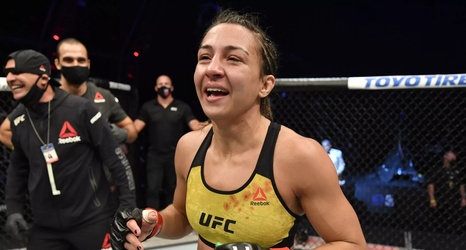 Rising strawweight prospect Amanda Ribas would like one more fight before 2020 is over. After beating both Randa Markos and Paige VanZant this year, the Brazilian recently told Ag Fight she has her sights set on division veteran Michelle Waterson.

Originally expected to take on Carla Esparza for December 12, Ribas has found herself without an opponent—after the former champion was sidelined for undisclosed reasons. However, the ATT fighter believes Waterson would make for an ideal replacement, especially because the ‘Karate Hottie’ is also ahead of Ribas in the rankings.

“That bummed me out,” Ribas said of Esparza’s withdrawal.