Even after his big win, would UFC give Curtis Blaydes any (interim) title opportunity? 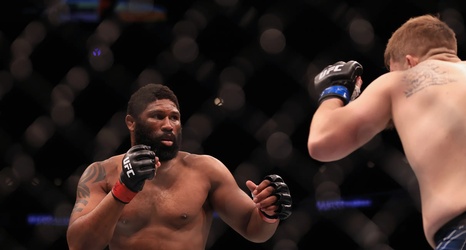 Curtis Blaydes is positioned to play spoiler in the UFC’s heavyweight division and that fact could keep the promotion from booking him in an interim title fight.

Before the UFC Columbus main card took place, former two-division UFC champion and current UFC commentator Daniel Cormier said of Blaydes, “He has all the tools to be the heavyweight champion of the world, it’s a matter of putting it all together.”

“Curtis Blaydes can wrestle. We all know that, but one thing that he has really improved on is his striking.”

Blaydes used that striking to score an impressive second-round knockout win in the main event of the UFC Columbus fight card.