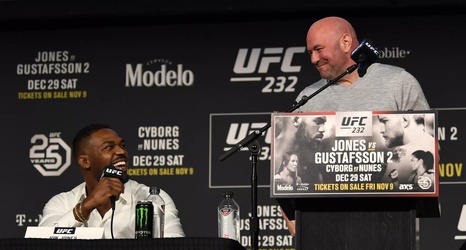 UFC president Dana White is having a tough time trying to get Jon Jones’ only career loss overturned.

Jones (26-1, 1NC) first and only loss came to Matt Hamill over a decade ago at The Ultimate Fighter season 10 finale. Dominating the fight until it was stopped, Jones was disqualified after landing several illegal downward elbows leaving Hamill unable to continue.

Talking recently to ESPN, White blamed the “weak” state of the Nevada State Athletic Commission (NSAC) at the time for Jones’ disqualification.

“The guy’s never lost a fight ever. That one loss on his record, we’re trying to get that overturned,” White said (Transcription via BJ Penn).