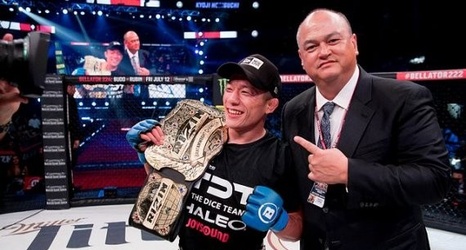 A high-profile free agent has just signed on the dotted line for Bellator MMA.

On Thursday night, Bellator head Scott Coker posted on Twitter that the organization has signed Kyoji Horiguchi (29-3) at bantamweight. He does not currently have his first opponent booked, but it is largely expected he will vie for the bantamweight belt held by Sergio Pettis.

Horiguchi achieved an incredible feat back in 2019 when he captured the Bellator strap from Darrion Caldwell at Bellator 222. As the reigning Rizin Fighting Federation kingpin as well, he became the second fighter in major organizational history to serve as simultaneous champion in two different promotions – Alistair Overeem was the first with Strikeforce and Dream.