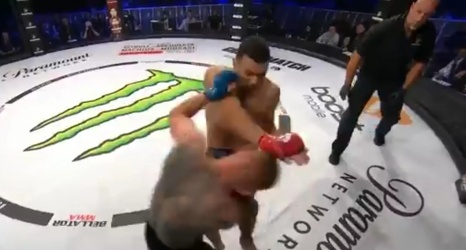 Two kickboxers were matched up on the Bellator Dublin prelims and a KO was all but guaranteed.

It was Ilias Bulaid who proved to be the better of two MMA debutants, as he put Vitalic Maiboroda away with a knee in their featherweight bout Saturday. Bulaid caught Maiboroda right on the chin and as soon as Maiboroda hit the mat, the bout was waved off by referee Dan Miragliotta.

Bulaid’s strike couldn’t have come at a more perfect moment. The official time of the stoppage was 4:59 of round one.

A 24-year-old Moroccan fighting out of the Netherlands, Bulaid looks like he can hang in the striking department with anyone in Bellator’s 145-pound division.