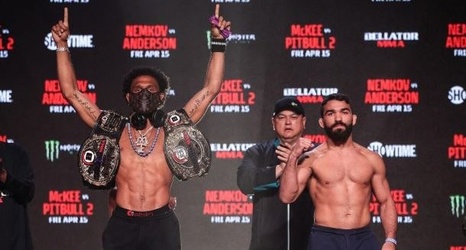 The most anticipated Bellator fight card of 2022 goes down this evening at the SAP Center at San Jose in San Jose, California. The card will be headlined by a rematch between former Bellator featherweight champion Patrício Pitbull and unbeaten, newly-minted champion A.J. “The Mercenary” McKee at Bellator 277.

The featherweight strap will not be the only title up for grabs; however, as Bellator light heavyweight world champion Vadim Nemkov is set to defend his title against former UFC contender Corey Anderson with an additional one-million-dollar grand prize up for grabs in the Bellator Light Heavyweight Grand Prix finals.