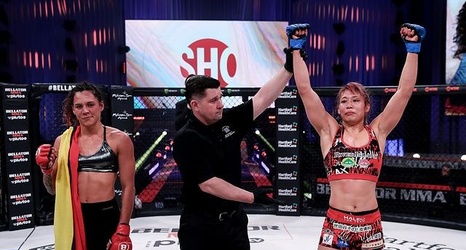 Bellator MMA is expected to venture to South Dakota for an upcoming card on Aug. 20.

Bellator 265 is set for the Sanford Pentagon in Sioux Falls, S.D., according to an initial report from MMA Island. The has not been formally announced by the promotion, nor does it have an official headliner. According to MMAjunkie.com, a women’s flyweight tilt between Alejandra Lara and DeAnna Bennett will take place on the card.

The California-based promotion previously traveled to South Dakota for Bellator 204 on Aug. 17, 2018, a card that saw Darrion Caldwell defeat Noad Lahat via second-round KO in the evening’s headliner.