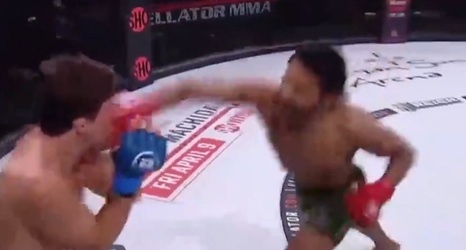 Mandel Nallo’s spectacular striking was on full display on Friday.

The Canadian lightweight was in complete control of his Bellator 255 preliminary bout opposite Ricardo Seixas, landing with power and accuracy to bloody Seixas up before finishing with a superman punch at the 3:23 mark of round one.

Watch the highlight-reel finish above.

With the victory, Nallo finds himself in the win column for the first time since October 2018 when he defeated Carrington Banks with a knockout knee. “Rat Garbage” fought to a no-contest in his most recent outing against Saad Awad at Bellator 249 this past October after Awad was rendered unable to continue by an accidental knee to the groin.