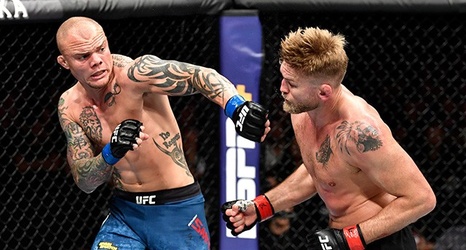 UFC Fight Night 153 on Saturday in Stockholm was full of upsets, a fact that sent shockwaves through more than one Ultimate Fighting Championship division. Five underdogs on the 12-fight card at the Ericsson Globe emerged victorious. They supply the material for this installment of Beating the Books.

In the main event, Smith picked up the most significant win of his career when he submitted Alexander Gustafsson with a fourth-round rear-naked choke. The fight remained competitive up until the finish, as Smith managed to find a hole in Gustafsson’s game and cinch the choke, retiring the Swede in the process.