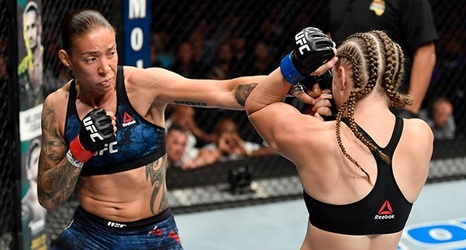 Aspen Ladd’s attempt to have her quick technical knockout loss to Germaine de Randamie overturned to a no contest was denied by the California State Athletic Commission on Tuesday.

The commission voted by a 3-to-2 count to uphold de Randamie’s 16-second stoppage victory, which occurred in the UFC Fight Night 155 headliner at Golden 1 Center in Sacramento, Calif., on July 13. A right cross from de Randamie spun Ladd around and sent her tumbling to the canvas, where she landed on her forearms. The Dutchwoman landed just one more punch before referee Herb Dean waved off the bantamweight bout.