Kenny Florian: At A Crossroads 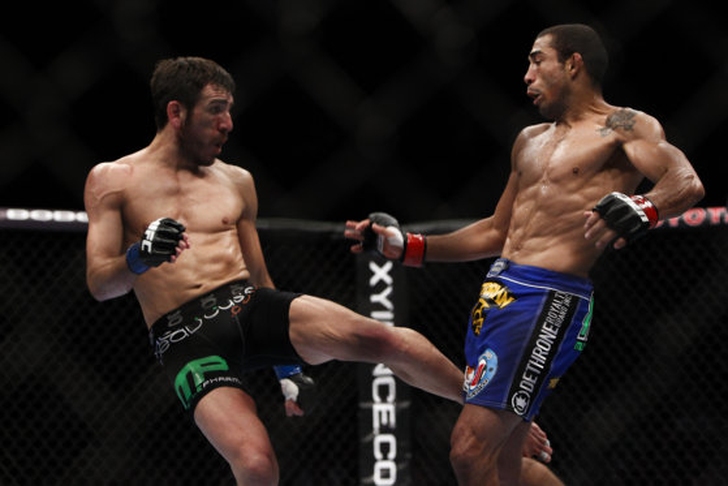 If you saw Kenny Florian at the press conference for UFC 136, right after his title fight loss to José Aldo, you looked into the eyes of a broken man. Despite fighting well against the Brazilian phenom, and winning at least one round on the judge’s scorecards, Florian’s title hopes were squashed for the third time in as many tries. Right now is tough time to be Kenny Florian.

Sure, Florian has amassed an impressive 12-5 record in the UFC since 2005, has a high-profile gig as an analyst on ESPN’s “MMA Live,” commentates at select UFC events, and has a successful gym in Brookline, Mass. But as a fighter, Florian just can’t seem to take it to the next level.

Kenny has worked his way to a title shot three times, coming up short all three times. But that’s not a direct indicator of Florian’s skills; he’s a talented mixed martial artist with a good jab, underrated wrestling, and a solid Brazilian Jiu Jitsu pedigree. He’s a good fighter. Really good. But up until now, he just hasn’t been able to make it over the hump to greatness.

Florian got his first title shot in against Sean Sherk in 2006, shortly after a stint as a blown-up middleweight on the first season on “The Ultimate Fighter.” Florian was still green then, and was outwrestled and outworked by the larger Sherk for 25 minutes, losing a unanimous decision.

After a six-fight win streak with five finishes, he got his second shot against BJ Penn, arguably the greatest lightweight fighter of all time. Again he came up short, wilting under the Hawaiian’s stout takedown defense and striking power. He lost by fourth round submission.

After two more wins, he battled Gray Maynard at UFC 118, with the winner being promised a shot at current Lightweight Champion Frankie Edgar’s belt. Like in the Sherk fight, Florian was outwrestled to a decision. Afterwards, UFC President Dana White criticized Florian, saying “I think Kenny is just one of those guys who chokes in big fights.”

The ever-shrinking Florian dropped to 145 and beat tough Brazilian striker Diego Nunes at UFC 131, earning a shot at Aldo’s UFC Featherweight title. And again, Kenny Florian was within arms reach of his dream, only to have it slip through his fingers via a barrage of kicks, punches, and takedowns from the explosive Brazilian wunderkind.

And now here we are.

Florian’s future in the UFC is hazy, but his dream to capture a UFC title may be slipping away. UFC 136 could have been his last opportunity at a belt, per Dana White’s pre-bout comments.

Despite that, White was complimentary of Florian’s performance this time, saying, "Kenny Florian went in there tonight going after it. He wanted that belt. Everybody's talked about how dominant José is, but Kenny went out took him the distance. He fought a great fight."

Kenny has always been a guy who fights the best; five of his last six opponents are still ranked in the top 10 in their respective divisions. Perennially, Florian is a talented, exciting fighter who has always been known as good, maybe even great, but unfortunately never the best.

And at the press conference, he sat, dejected and head down. His normal eloquence and humor were gone, replaced by short, muted answers like "I fought very hard. I trained extremely hard and wasn't successful. That's it."

But Kenny will be back. After every one of his title fight losses, Florian came back with an impressive win or winning streak. He may not challenge for UFC gold again, but his head probably won’t be down for long.