Yelich exits after fouling ball off knee in 1st inning 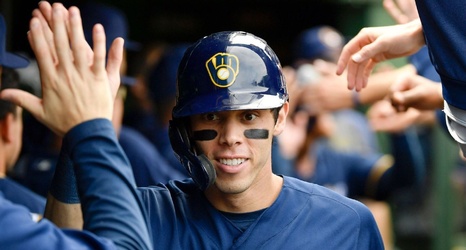 Right fielder Christian Yelich left the Milwaukee Brewers' game against the Miami Marlins in the top of the first inning on Tuesday after fouling a ball off his right knee.

The reigning National League MVP is hitting .330 with 44 home runs and 97 RBIs this season.

Trent Grisham pinch-hit for Yelich, striking out after taking over with a 1-2 count. The strikeout was charged to Yelich.

Grisham stayed in the game in right field.

The Brewers entered the night two games behind the Chicago Cubs in the race for the second wild card.