Dodgers' Friedman Praises Mookie Betts: 'He May Wanna Get a Restraining Order' 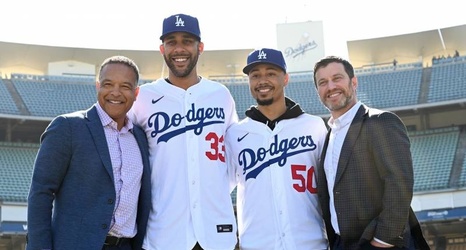 Los Angeles Dodgers president of baseball operations Andrew Friedman has apparently been a fan of the newly acquired Mookie Betts since well before his team traded for the outfielder.

"It goes back a long time, from afar," Friedman said, per Alden Gonzalez of ESPN.com. "He may wanna get a restraining order against me."

Gonzalez noted Friedman liked Betts as far back as when the former Boston Red Sox slugger was trying to make the major leagues as a second baseman and the Dodgers president was with the Tampa Bay Rays.