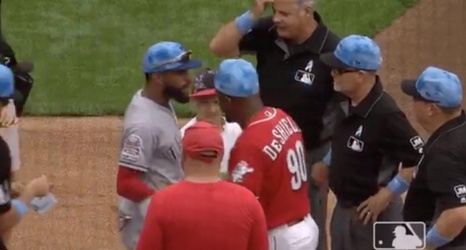 The baseball diamond is familiar with father-son duos coming together, and the latest incident will warm your heart no less.

Before Sunday's matchup between the Rangers and Reds, Delino DeShields Jr.—a Texas infielder—and his father, Delino DeShields Sr.—Cincinnati's first base coach—got a chance to share a moment together at home plate when they exchanged lineup cards.

DeShields Sr. was a first-round draft pick in the 1987 MLB draft. He spent 13 seasons in the majors prior to playing his final game in 2002. His son, DeShields Jr., was also a first-round pick in the 2010 draft, and has spent each of his first five pro seasons with the Rangers.