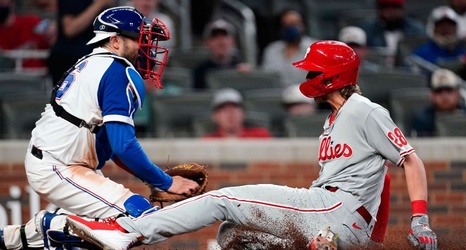 A controversial lost replay challenge by the Atlanta Braves in the ninth inning on Sunday night was the difference in the game, as the visiting Philadelphia Phillies came from behind in a wild 7-6 victory.

Phillies third baseman Alec Bohm slid home with the eventual winning run as Braves catcher Travis d'Arnaud attempted to apply the tag, moving from the third-base side of the plate to the first-base side, where Bohm was coming in.