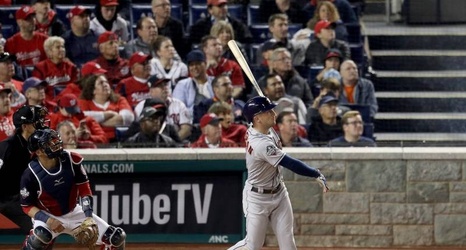 The Houston Astros tied the World Series at two games apiece with a 8-1 win over the Washington Nationals in Game 4 on Saturday in Nationals Park.

The Astros tagged Nationals southpaw Patrick Corbin for two earned runs on four hits in the first inning and doubled their score thanks to a Robinson Chirinos two-run homer in the fourth.

Houston then doubled it one more time in the seventh when Alex Bregman launched a grand slam inside the left-field foul pole.

The Nats' best chance at a comeback occurred in the sixth when they loaded the bases for 20-year-old slugger Juan Soto with one out down 4-0.