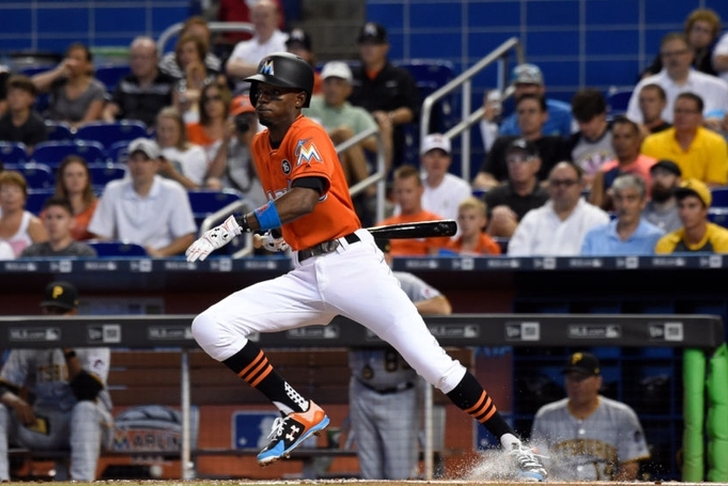 The MLB trade deadline is just a few weeks away and there are already several notable trade rumors. With the All-Star break here, trade talks could ramp up. That means more leaks reports which players could be dealt and which teams are ready to buy or sell. Here are all the latest MLB trade rumors from the hot stove you need to know.

Dee Gordon Drawing Interest
The Miami Marlins are 10.5 games back of the NL East-leading Nationals and on the verge of new ownership. They're willing to sell and that's led to some talks centered on second baseman Dee Gordon. Jon Heyman of FanRagSports reports that three teams have talked with the Marlins.

"The Angels, Blue Jays and Royals are the three teams that have at least mentioned Marlins second baseman Dee Gordon, sources tell FanRag Sports," Heyman writes. "The Angels have been having trouble at second base and are looking, the Jays have lost Devon Travis to injury and the Royals have long been enamored with Gordon. The three teams have other needs, as well, so it’s unclear what the chances for a deal are."

All three teams are near .500, with the Royals at 44-43, the Blue Jays at 41-47 and the Angels at 45-47. Gordon's contract runs through 2020, with an option for 2021. That level of team control helps Gordon's value, though Heyman adds the Marlins might need to help pay some of Gordon's contract. Despite not playing as well as he did during his All-Star 2014 and 2015 seasons, Gordon is still a quality starter.

Cubs-Tigers Talk Trade
The Chicago Cubs are looking for starting pitching help and they've called the Detroit Tigers. However, the Cubs aren't looking at Justin Verlander.

Schwarber has upside, but he's still just a career .210 hitter and was sent down to Triple-A this year. Especially in any deal for Fulmer, the Cubs would need to offer a lot more to get a deal done.

Twins Looking For Starters
The Minnesota Twins are a surprising 45-43, right in the mix for a playoff spot in the AL. As a result, they're looking to upgrade their rotation.

Sources: #Twins checking on controllable starters. List would include Quintana, Gray, as well as someone like Straily (control through ’20).

Jose Quintana, Sonny Gray and Dan Straily are likely among the top targets for teams looking for pitching help at the Trade Deadline (especially Quintana and Gray). That could result in a bidding war, which might be too pricey for the Twins. It's not a coincidence the Twins want controllable players: they aren't interested in rentals since they're still a young team.