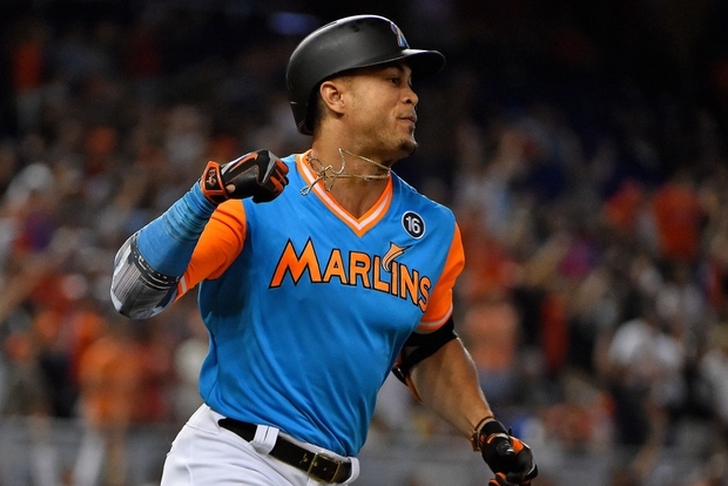 The MLB offseason has been relatively quiet to this point, but that should change during baseball's winter meetings starting on this weekend,  which is where much of the foundation for offseason trades and other acquisitions take place. As such, the rumor mill is buzzing with potential free agent signings - namely Japanese star Shohei Ohtani - and trade talks, especially regarding Giancarlo Stanton and now Manny Machado. Here are all the latest MLB rumors you need to know.

Giancarlo Stanton willing to accept trade for four teams
The Miami Marlins had tentative deals in place with both the San Francisco Giants and St. Louis Cardinals for Giancarlo Stanton, but he - to this point - has refused to waive his no-trade clause for either team. Instead, he is only willing to accept a trade to the Chicago Cubs, Houston Astros, Los Angeles Dodgers, or New York Yankees, according to SiriusXM's Craig Mish.

Stanton met with both the Giants and Cardinals after Miami reportedly told him that, if he doesn't accept a trade to one of those teams, the Marlins will deal their other key players to save salary and he will be the lone star on their team as they go through another rebuild.

Giants, Cardinals not out of Stanton race yet
However, Stanton hasn't totally eliminated the Giants and Cardinals yet, according to Mish, but they are not his preferred destination.

Cardinals and Giants not on Stanton's approval. Unclear if either or both teams have been told anything to this point.

The only two deals that were agreed upon with the Marlins were with St Louis and San Francisco so Stanton took meetings with both of those clubs despite not being on his preferred list. Again, unclear at this time where they stand.

Cardinals shopping Dexter Fowler?
While the Cardinals were in on the Stanton mix as they looked to add to their current lineup, they could be shopping last offseason's big acquisition in outfielder Dexter Fowler, according to Jon Heyman of FanRag Sports.

Some people believe Dexter Fowler could become available in trade. Fowler was their big free-agent signing last winter, but some believe they are open to at least listening. They already traded their big signing from the year before, Mike Leake, when the Mariners agreed to take on the majority of his deal. If they were to trade Fowler, they’d expect the same in such a deal – they’d pay only a small part of it. It isn’t known whether Fowler’s availability is dependent on a potential trade for Giancarlo Stanton, but it makes sense that it might.