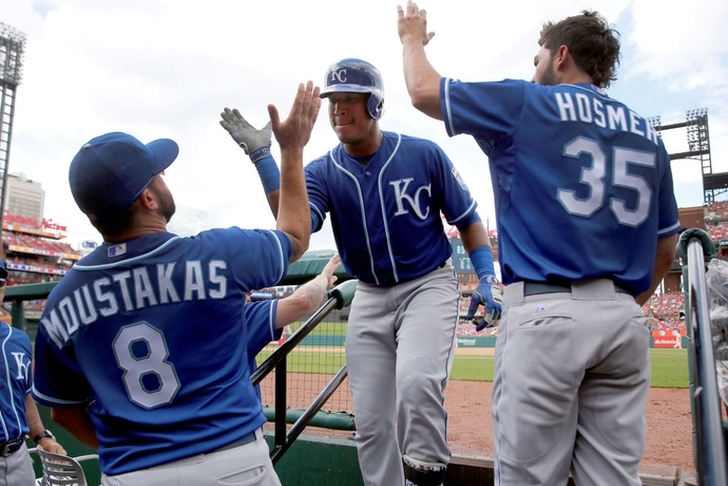 The MLB season is barely a month old, but there are already rumors flying about a few big names who could be dealt before the trade deadline. The Hot Stove is always on and several teams have already emerged as buyers and sellers. Here are all the latest MLB rumors you need to know.

Royals Preparing To Make Trades?
Sitting at 10-20 and in last place in the AL Central, it looks like the Royals will be sellers at the trade deadline barring a drastic turnaround. Nick Cafardo of the Boston Globe reports the Royals are ready to trade several players by scouting farm systems.

"The Royals have their scouts scouring the farm systems of organizations they feel they might match up with in trades for pending free agents Lorenzo Cain, Eric Hosmer, and Mike Moustakas," Cafardo writes. "The prevailing thought is the Royals can move Cain the easiest, but he’s the one they’d most like to keep."

Cafardo also adds that the Royals will re-sign shortstop Alcides Escobar, so he won't be a trade chip. In addition, Cafarado suggests that reliever Kelvin Herrera could be a trade chip if the Royals decide to blow up the team. Previously, the Royals haven't included Herrera in trade talks. Cafardo mentions the Washington Nationals as a potential landing spot.

ESPN's Buster Olney has another trade chip as well: Jason Vargas. Olney says Vargas "has a chance to become one of the most coveted pitchers of the summer market," thanks to his strong pitching thus far and a cheap contract. Vargas will make just $8 million this year, the last year of his contract. That makes him a cheaper rental option for teams needing pitching help.

Matt Harvey Latest
The Matt Harvey saga has taken another twist. After being suspended by the team for missing Saturday's game after claiming he was ill, Harvey is scheduled to make his next start on Friday. But Jon Heyman of FanRag Sports reports things between Harvey and the Mets aren't in a good place.

Heyman reports that after texts to Harvey went unreturned, the Mets sent some security officers to check in on him. The Mets simply wanted to make sure Harvey was okay. But per Heyman, Harvey didn't view the visit as a welfare check, but rather trying to figure out if Harvey was even sick at all.

Heyman reports a grievance is still likely, with Harvey unhappy about the suspension. Heyman also reports the Mets might claim this isn't the first time Harvey has been late or missed a team event, thus justifying a suspension and not a fine. This likely isn't the last of the Harvey-Mets saga and if there is a grievance, it might not be a happy ending.

Cubs Deadline Plans
The Chicago Cubs' aggression at the trade deadline last year was instrumental in helping them finally capture another World Series crown. But will the Cubs follow the same plan at this year's deadline as they attempt a repeat? General manager Jed Hoyer said this year might not be the same as 2016.

"I don’t want to say forced our hand (last year)," Hoyer told CSN Chicago. "But with the way they played it was clear that this was a team to be really aggressive for. I think every year you have to feel that out. You have to get a sense of your club. Obviously, it’s too early to have a sense of this club. But last year, give them credit, they went 25-6 out of the gate and they made it really clear this was a year to be aggressive."

Hoyer also added that the Cubs didn't want wind up in a position where the farm is depleted and they're searching for a trade every deadline.

"You can’t get in a cycle where you’re always doing something for rentals," Hoyer said. "But at the same time, every season is sacred and you only have (so many chances). There are going to be years where things don’t come together, you have injuries, another team runs away with it. That’s going to happen. So when you know you’re in a good position, [go for it]."

If the Cubs do target an area, pitching seems like the logical fit.

Pirates' Jameson Taillon Treated For Cancer
Jameson Taillon was placed on the DL yesterday with "groin discomfort," but it turns out it's more than that. The Pirates announced Monday that Taillon has been treated for suspected testicular cancer.

The severity and timetable for Taillon's recovery is still unknown. The 25-year-old Taillon was the second pick in the 2010 draft. He has a career 7-5 record with a 3.36 ERA and a 1.17 WHIP.