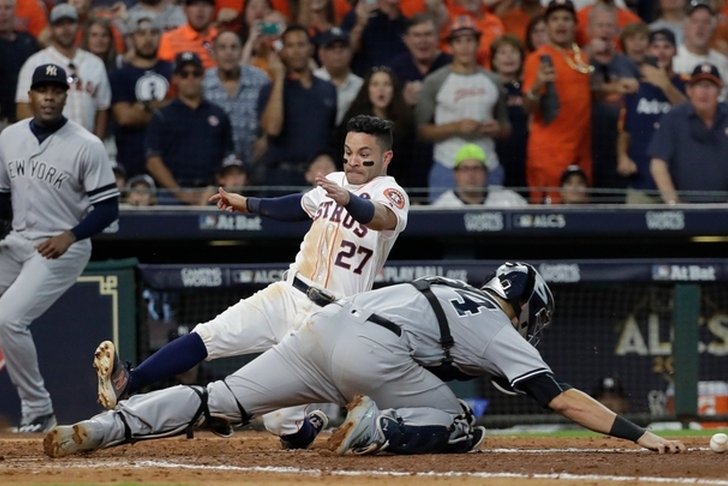 The Houston Astros have taken a 2-0 lead over the New York Yankees in the ALCS thanks to a pair of 2-1 wins, but now, the series shifts to the Bronx. New York also lost the first two games of their NLDS series against the Indians before reeling off three straight wins. Can they turn the momentum of the series around again at home? Here's everything you need to know going into Game 3:

What they're saying about the Houston Astros:
Astros confident with good memories in Bronx (Astros.com)
Justin Verlander and Dallas Keuchel Have Been a Lethal Duo in Houston (NumberFire)
Astros: Tonight’s matchup vs. Sabathia could be a trap game (Fansided)

What they're saying about the New York Yankees:
Why the Yankees could and should still win the ALCS (Pinstripe Alley)
MLB rumors: Joe Girardi saying goodbye to Yankees after playoffs? (NJ.com)
Sweeny: Sabathia Has Saved Yankees Before, And Is Right Guy To Try Again (CBS)

Key to the game:
Will New York be able to find their offense?
New York has won 11 of CC Sabathia's 15 postseason starts since 2009, but they've been able to provide him with run support in those games - something they've been unable to do in the first two games of the series. Stars Aaron Judge and Gary Sanchez have combined for just one hit and eight strikeouts in the ALCS, and this is after going 5-for-43 with 26 strikeouts against Cleveland. Other players have stepped up for the Yankees (particularly Didi Gregorius), but New York won't go anywhere unless Judge and Sanchez break out of their slumps. They are hoping that starts tonight.

Prediction: Yankees win 6-4
I think this is the only game New York will win in the series. They were able to find some magic and turn the season around in the ALDS once they returned to Yankee Stadium, a place where they had the best home record in the AL during the regular season. Look for New York to hit a couple of home runs off of Morton as they get jump out to an early lead.