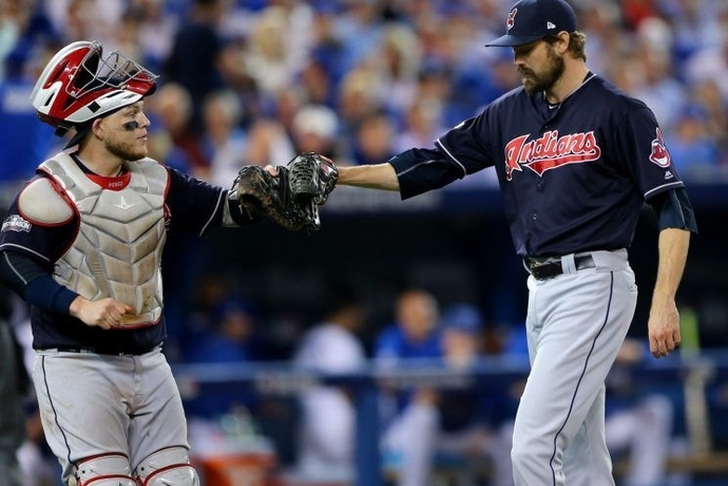 The MLB playoffs continued on Monday night with Game 3 of the ALCS, which resulted in a 4-2 win for the Cleveland Indians over the Toronto Blue Jays. Cleveland can sweep that series in Game 4, which gets underway this afternoon, while the Los Angeles Dodgers will host the Chicago Cubs in Game 3 of the NLCS tonight (that series is tied, 1-1). Here is a recap of last night's game and a preview of both of today's games:

Indians take 3-0 lead
Cleveland has hoping to get a few innings from starting pitcher Trevor Bauer, who was supposed to start Game 2 but was scratched from the start after cutting open his finger while doing "routine maintenence" on his drone. Instead, he lasted just two outs after the cut reopened:

Rather than folding, Cleveland's bullpen took over and proved to be the stars of this game. Six pitchers came on after Bauer and combined to limit the Blue Jays to two runs on seven hits. The game was tied 2-2 until the top of the sixth inning, when Jason Kipnis blasted a solo shot to put the Indians on top:

Cleveland added another run late in the inning and held on for the 4-2 victory.

Now, the Indians have a chance to punch their ticket to the World Series this afternoon. Corey Kluber, who won Game 1 for Cleveland, will start on short rest in an effort to end this series now. Kluber is 2-0 with a 0.00 ERA so far this postseason. Aaron Sanchez will start for Toronto, who is making his second career postseason start.

First pitch is set for 4:00 pm ET on TBS. Here are the projected lineups for the game:

Cubs, Dodgers square off in crucial Game 3
In the NLCS, the Cubs and Dodgers are moving to Los Angeles to continue their series after an off day on Monday. The Dodgers are coming off a 1-0 win in Game 2 to get back into the series, thanks to a dominant performance from Clayton Kershaw.

Chicago is hoping to get a similar result from their ace tonight, as Jake Arrieta will take the hill for the Cubs. Worth noting - Arrieta no-hit the Dodgers in his last start against them in LA. Rich Hill will take the mound for the Dodgers, who is 0-2 in three career playoff starts.

This game is set to start at 8:00 pm ET of FS1. Here are the projected starting lineups for each team: