The Latest MLB Trade Rumors On Rangers After Chris Sale, Nationals Looking At Closers And More 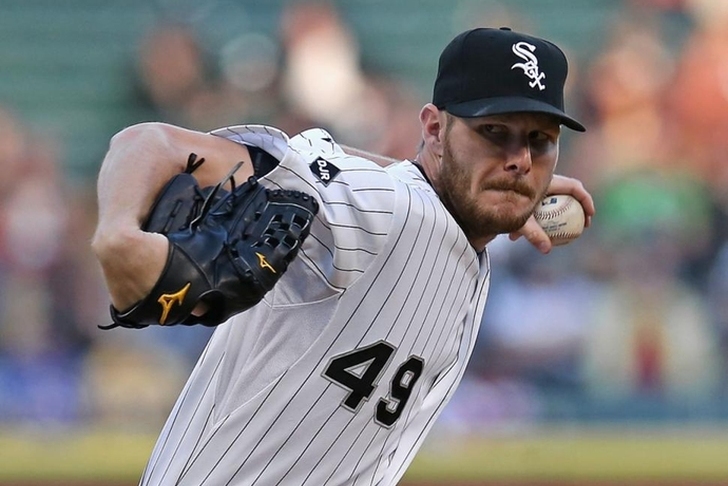 The MLB trade deadline on August 1st is rapidly approaching and the MLB trade rumors are starting to heat up on the hot stove. With the deadline a mere few days away, teams in the postseason race are focused on improving their rosters before the non-waiver deadline. The teams selling are hoping to find prospects to boost their rebuild or even getting rid of some payroll. Here are all the latest rumors and news you need to know.

Rangers, Others After Chris Sale?
A trade of Chris Sale is no sure thing, but teams are looking into him. At the top of the list is the Texas Rangers.

The Texas #Rangers continue to be the most aggressive team in the pursuit of #Whitesox ace Chris Sale, but Sox asking price remains steep.

The Rangers were one of several teams to scout Sale (and likely other White Sox players) yesterday.

Still think it's unlikely that Chris Sale gets dealt. But FWIW, the Rangers, Orioles, Marlins & Nationals all had scouts at his start Thurs

The Orioles surely don't have the prospects to land Sale, and neither do the Marlins after trading for Andrew Cashner. The Nationals might have been scouting closer David Robertson instead.

Nationals Looking At Closers?
With Jonathan Papelbon struggling, the Nationals are looking hard at a variety of closers.

Melancon would be cheaper than Davis, but the Pirates might not want to deal him since they're also in the postseason hunt. The National are also looking at Andrew Miller, and could pull the trigger on offering Lucas Giolito for Miller.

Latest On Jay Bruce
There likely isn't a better corner outfielder on the trade market than Jay Bruce. It's long been assumed that the Reds will trade him, which might be a contributing factor in a "surprisingly tepid" market according to the Cincinnati Enquirer.

The interest in right fielder Jay Bruce remained surprisingly tepid given the 29-year-old’s monster season, although Jocketty felt things could pick up as the week progresses. There have been interested teams, but none willing to pay what Jocketty would consider a serious price.

"Clubs inquire about certain players, but they never want to trade you anything," Walt Jocketty said. "So what’s the point? You wouldn’t believe some of the stuff … There are clubs that have been engaged on Jay for a while, but they’re basically the same clubs. No one’s really come up and been really aggressive with it. I can’t say anything’s going to happen imminently because we’re just not in that kind of position.”

The Reds want a "legitimate prospect" and with the way Bruce has played this season (he was named to the All-Star team), that's a fair request. It's more likely than not a deal eventually gets done, especially since Bruce himself has said on multiple occasions he expects to be dealt.