Jonathan Lucroy Trade Rumors: The Latest On The Brewers' Catcher Before The Deadline 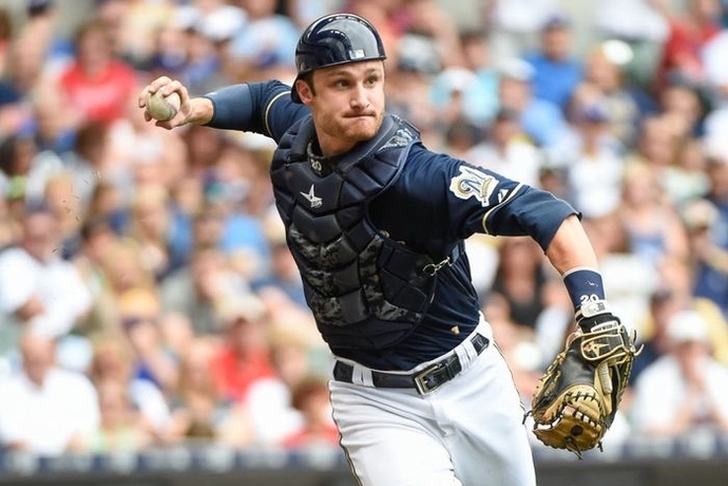 The Milwaukee Brewers are trade talks on catcher Jonathan Lucroy have intensified and it seems very likely that he'll be traded. The Cleveland Indians, New York Mets, Texas Rangers, Houston Astros, Detroit Tigers and Boston Red Sox are among the known teams interested in making a deal for Lucroy. He has two more controllable years left on his contract and is easily the best catcher on the market at this year's deadline. Below, we have all the latest rumors surrounding Lucroy, broken down by team and in alphabetical order.

As new information is made available, we'll update this post.

Boston Red Sox
The Red Sox were one of several teams linked to Lucroy by ESPN's Jerry Crasnick.

#Rangers, #Indians, #Astros, #Mets, #Redsox have been mentioned in Lucroy mix. And believe it or not, there appears to be a "mystery team.''

We'll use that tweet as a basis for a few other teams. Lucroy would fill a need for Boston, as Christian Vazquez has struggled at the plate, Blake Swihart is hurt (and not great on defense) and Sandy Leon isn't an ideal short or long-term option. However, he might be a bit out of Boston's preferred price range. Any deal will likely include Swihart or Vazquez.

Cleveland Indians
The Indians were mentioned by Crasnick in the above tweet, but he elaborated on what the Indians could do with the Brewers.

The #Indians have had dialogue with #Brewers on Jonathan Lucroy and reliever Will Smith. One-stop shopping to fill two needs?

Smith will be cheaper than Brewers' closer Jeremy Jeffress and the Indians are hesitant to move any of their top prospects. But getting Lucroy and Smith could get them to part with someone. The Indians' offense from the catcher position has been poor this season. Yan Gomez is hitting .165 (and is hurt), Chris Gimenez is hitting .204 and Roberto Perez has a woeful .045 batting average in 22 at-bats. Lucroy's .300 batting average would be massive upgrade. Update: Lucroy can block a trade to the Indians.

Detroit Tigers
Remember that mystery team Crasnick mentioned? It's probably the Tigers. Ken Rosenthal pegged them as a surprise entrant, saying they could offer current starting catcher James McCann and prospect(s). However, the Tigers might have problems landing Lucroy given the Brewers' desire to land prospect and the Tigers' thin farm system. Update: The Tigers now appear out of the running. They are one of the team Lucroy can block a trade to.

Houston Astros
The Astros were mentioned by both Crasnick and Rosenthal, but they appear to be on the outside looking in now.

The #Astros do not appear to be in the mix for Jonathan Lucroy. Their reported pursuit was overblown, according to one source.

The means the Astros are likely to continue with Jason Castro as the starter and Evan Gattis as the DH/backup. However, Rosenthal did mention the club could look for a lesser option at the position.

New York Mets
The Mets and Brewers talked about a Lucroy trade previously and it appears the two sides have started talking again.

The Mets' original trade proposal of catcher Travis d'Arnaud straight up for Lucroy was shot down by Milwaukee. The Mets would need to give up at least one prospect and the injury-prone d'Arnaud to land Lucroy.

Texas Rangers
The Rangers have been connected to Lucroy for quite some time, even before the deadline. They remain in the mix for him, per both Rosenthal and Crasnick. The Rangers could use Lucroy's bat, since no catcher on the active roster is hitting above .238. Plus, Ian Desmond is the only Ranger hitting at or above .300.