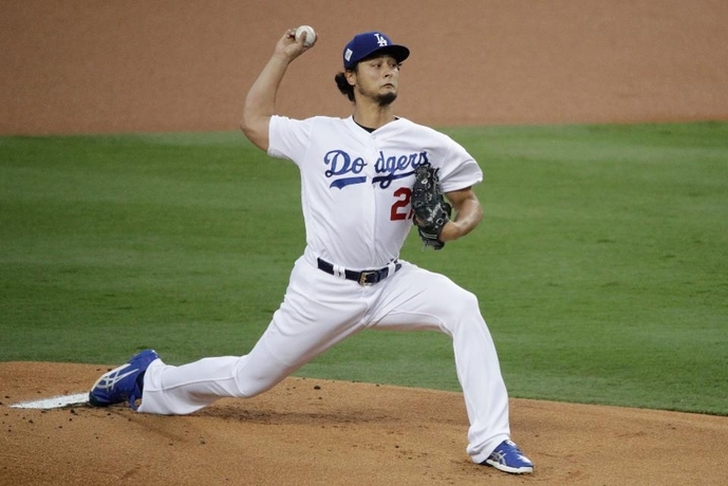 Yu Darvish is one of the biggest names still on the MLB market, and while he has been linked to a few teams this offseason, he confirmed a list of six teams - five knowns and one mystery team - that are interested in his services. Darvish is 31 years old and coming off a season where he had a 3.86 ERA over 186.2 innings pitched with 209 strikeouts and 58 walks. Which teams are the most likely to land him? We rank those top six - and guess who the mystery team is.

6) Los Angeles Dodgers
Los Angeles wasn't planning on bringing Darvish back given his struggles in the World Series and the price he was expected to command on the open market, but with how slow the market has been this winter, there's a chance they could get Darvish for a better price. They're still looking at other pitching options, but don't completely rule out a return just yet.

5) Minnesota Twins
The Twins were a breakout team in 2017, earning the second Wild Card spot in the AL - and they're hoping their return to the playoffs isn't just a one-time thing. As such, they're looking to strengthen and deepen their roster this offseason, starting with their rotation. Darvish would help strengthen the depth of that rotation and would be cheaper than some of the other top-end arms available, which is important for a team like the Twins who usually don't spend as much as other top teams.

4) Houston Astros
The Astros made it a point to upgrade their starting pitching at the trade deadline by landing Justin Verlander, and they're looking to acquire another ace this offseason. Houston is targeting Darvish, Chicago's Jake Arrieta, and Tampa Bay's Chris Archer, but Darvish appears to be their favorite - especially after a deal for Pittsburgh Pirates starter Gerrit Cole fell through.

3) Texas Rangers
The Rangers have been rumored to be very interested in bringing back Darvish this offseason, and he's also interested in a return. The Rangers are in need of pitchers, especially in their starting rotation. The only pitchers in the rotation that have actual major league experience are Doug Fister, Cole Hamels, and Martin Perez.

2) New York Yankees
The Yankees are reportedly seriously considering signing Darvish. After acquiring Giancarlo Stanton, much of New York's offseason has revolved around signing or trading for a starting pitcher.

Masahiro Tanaka and CC Sabathia will be back with the Yankees next season, but New York would still like to add some depth to their rotation. Sonny Gray and Luis Severino are known to be key cogs in New York's rotation next season and they'd love to add Darvish to that group.

The Yankees are currently committed to seven players for an estimated total of $120 million, according to Cot's Baseball Contracts. Once the eight arbitration players and contract obligations of traded players are added, their projected payroll in 2018 will be near $170 million. With the Competitive Balance Tax Base Tax Threshold set at $197 million for 2018, this means the Yankees can still give Darvish the kind of contract he is seeking.

1) Chicago Cubs
Jake Arrieta is testing the waters of free agency, which leaves the Cubs looking for an ace in the rotation. As such, they have ramped up their pursuit of Darvish, who they believe can be a cheaper option.

Darvish confirmed on Twitter that he met with the Cubs, and now that Darvish is a legitimate option, the Cubs are focusing their attention on him instead of Tampa Bay Rays pitcher Alex Cobb. Darvish will be more expensive than Cobb, but they believe his ability and potential is worth the extra expense.