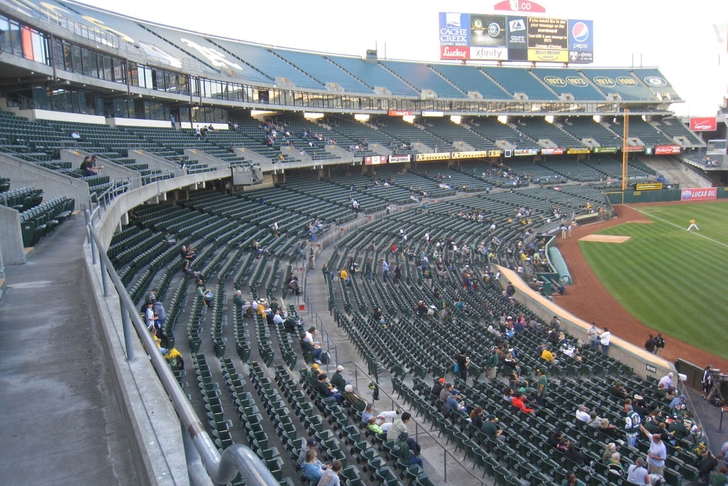 Baseball can grow anywhere, from the streets of New York to the beaches of California. However, these next five MLB stadiums push the limits of that philosophy.

While you'll find great, diehard fans all of these ballparks and in all of these cities, these next stadiums just aren't quite "with it" from an experience standpoint. So, without further ado, here's our list of The 5 Worst Stadiums To Watch An MLB Game In 2015.

OWWWWWWWWWW. That's what your eyes will scream when scanning the color explosion that is the aquatic...statue(?) in center field. Perhaps the quirkiest of all in the new wave of modern ballparks, the problem here lies in a general lack of excitement around the product. Until the Marlins can fully regain the trust of their fans (hard to do after multiple roster teardowns), Marlins Park will continue to be a half-full pop art exhibit.

Some of the greatest baseball moments of the early 90s emanated from the building formerly known as SkyDome. However, a stadium that was state-of-the-art back when it opened in 1989 hasn't exactly evolved with the times -- showcasing the same amenities and features which now appear antequated two-and-a-half decades later. The on-field product has a chance to outstrip its surroundings (and bring thousands of great baseball fans along with it), but the now-Rogers Centre and its concrete-like playing surface have slipped behind the times.

It's only just under two decades old, but Turner Field is such a yawner from an aesthetic, architectural, and location standpoint that the team is already picking up their tent posts and moving to the Northside of the city. Attendance has been hit and miss even in the team's successful years, and that's likely because there's nothing in or around this stadium that will get casual fans' blood pumping. Turner Field is exceedingly average -- and that's not a compliment.

One of two dual-purpose stadiums left in baseball (Rogers Centre being the other), O.Co Coliseum is literally falling apart. The fans (when they do show up) are some of the loudest and most passionate in baseball, but that doesn't excuse sewage floods, rat infestations, and the monstrosity that is Mount Davis blocking a once great view in the outfield. Former MLB Commissioner Bud Selig once (un)affectionately referred to it as "the pit," and that's not far off the mark when you take the near 50-year-old stadium in objectively.

Ever wanted to play baseball inside of a corn silo? That would have about the same level of ambiance as Tropicana Field -- a true modern testament to blahness both inside and out. The playing surface is horrendous, there's catwalks that can run interference during a game, and the eyesore of a stadium is located woefully out of the way for most Rays fans in St. Petersburg. The on-field product may be exciting most of the time, but it's framed by one of the ugliest modern sports stadiums around.

The 5 Best Managers In Baseball