The 4 Major League Baseball Fan Bases With The Most Class 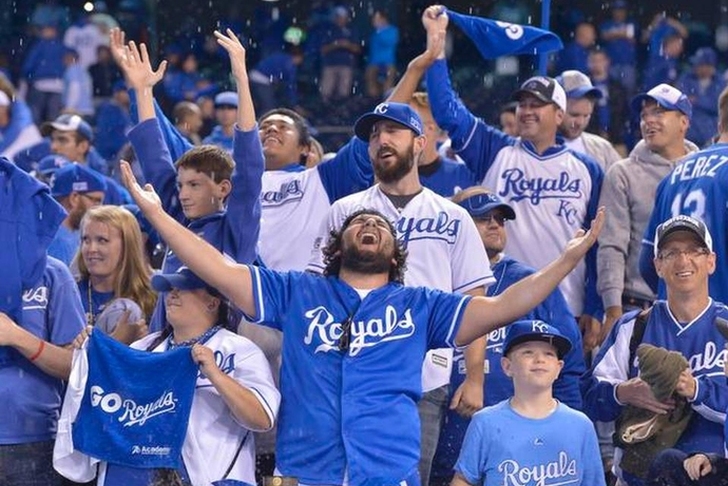 Every Major League Baseball team has its share of die-hard fans who make each stadium experience unique. We've all heard the stories of what happens when some of these fans get overzealous and things get ugly, but we're here to celebrate the flip side of the fandom coin. Here's our list of the The 4 Major League Baseball Fan Bases With The Most Class.

"The friendliness of KC is due to a culture where we offer hospitality and kindness to both our neighbors and our visitors. I find it amazing that Royals players have celebrated with fans after the games. We're fans that don't only support our multiple teams, but we support one another." Danielle Ripley-Burgess (Huffington Post)

Royals fans have been shoved aside over and over while national TV analysts celebrate Cardinals fans as the 'best in baseball' (*cough* Joe Buck *cough*), and that's a crying shame. Kansas City fans are some of the most passionate, quirky loyalists you'll find in any sports city across any country. You're likely to face some razzing as an open-hearted opposing fan in the stands, but it is usually followed by a pat on the back and some self-deprecating humor when things turn sour on the home team. Great food (mmmm, BBQ), nice people and a in-stands experience that will make any fan's baseball heart soar. This is what the game is all about.

NEXT READ: 4 Best Stadiums To Experience An MLB Playoff Game

"My mom loves this team with all her heart. This is a woman who knows I work for a sports website, where I literally talk about sports and watch sports all day, and still texts me the scores of Pirates games because she wants to make sure I don’t miss them. And whenever the Pirates slide, she swears they’re gonna turn it around any day now while I’m convinced it’s the beginning of the end. She will never not sing We Are Family during a game." Diana Moskovitz (Deadspin)

When you come in contact with a die-hard, long-suffering Buccos fan, you're usually in for a treat. Pittsburgh fans are some of the most knowledgable in the game, and they love to both share and listen to stories about the game they love. There's 133 years of history behind the Pirates organization, reaching all the way back to their 1882 inception as the Pittsburgh Alleghenys. Pirates fans tend to embrace this history, and they're more than happy to bring friendly outsiders in on the fun. Want to watch a game with some of the most down-to-earth people around? Take a trip to PNC.

"I should say that most baseball teams (if not all) and fans were class acts last night, as moments of silence were held in honor of the victims of the Boston Marathon bombing at ballparks across the country. More specifically, a number of parks played “Sweet Caroline” as well, as the song, of course, is a staple of Boston Red Sox and Fenway Park tradition. But because sports fans can be such overzealous a-holes sometimes thanks to heated rivalries, it’s especially sweet to see that New York Yankees fans paid their respect to their bitter adversaries in Beantown by playing the song and singing along. Leave it to the one thing that makes people act the most insane to help bring us a little closer to normalcy." Ashley Burns, Uproxx

Yankees fans get a bum rap. Championship after championship has bred stereotype after stereotype, casting Bronx Bombers loyalists in an unfair light more often that not. Let's stop mistaking an unbridled love of the game for rudeness. Boasting the most diverse array of cultures and backgrounds among any and all fan bases in North America, Yankees fans turn the history of baseball and the millions of lives its impacted into something palpable to be experienced every night at the Stadium. If you love baseball and have an open heart, you will be accepted. You'll need to be able to laugh at yourself, but you'll also be given a firsthand look into perhaps the most unique sports subculture in American history.

"But much comes from our Friendly Confines, a baseball neighborhood as warm and welcoming as a family cookout, sometimes as wild as the old Maxwell Street on the weekend. And some of it comes from heroes and icons, such as the late Ron Santo and Ernie Banks. One other thing—the Cubs have fans everywhere. When our team loses, everyone from the local dry cleaner to late-night TV hosts make jokes." Andy Frye (Red Eye Chicago)

Cubs fans - watch this: UNITED WE RISE: This New Blackhawks Hype Video Will Reignite The Fire

It's just a different experience at Wrigley. The best of Cubs fans are both funny and willing to laugh at themselves and the team's decades of journeying through the baseball wilderness. Watching Chicago fans' faces as they live and die on every pitch is a sight to behold, and they tend to respect those who wear their hearts on their sleeves and root with their whole beings. It's the Friendly Confines for a reason, folks. It's one of the nicest and most unique places to sit back, relax and take in a pure slice of Americana.