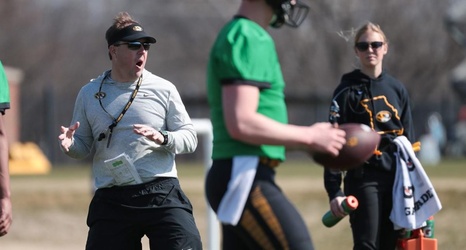 COLUMBIA, Mo. — Eliah Drinkwitz’s offensive expertise is the primary reason he landed the head-coaching job at Missouri, but the restoration of an offense that needs major repairs won’t happen after one spring practice. Maybe not after a full six-week session of spring practices.

Mizzou held its first practice of the Drinkwitz era on Saturday. After a 6-6 season that came undone by a stagnant offense — and ultimately cost Barry Odom his job — the Tigers feature some intriguing players on that side of the ball. In time, playmakers will emerge. An identity, too.

Drinkwitz has a plan and structure in place to install his system, but Saturday wasn’t about grand revelations.