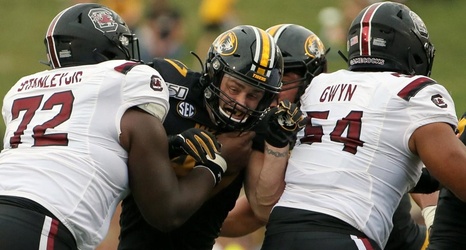 Missouri Tigers linebacker Cale Garrett (47) fights through a block to pressure the quarter back in the third quarter during a game between the University South Carolina vs University of Missouri at Faurot Field, at Memorial Stadium in Columbia, Mo. on Saturday, Sept. 21, 2019. Photo by David Carson, dcarson@post-dispatch.com

It was Oct. 5, and the second half of Missouri’s game against Troy had just started. Garrett’s All-American campaign continued to blossom in the first half. Six more tackles. Two more interceptions. Another touchdown, his third in three games. But as Lindi Burns scanned the Mizzou sideline she couldn’t find her son.